3 Keys to Leading in Times of Disruption

My wife and I live urban.  Several years ago, we were privileged to downsize and  move into one of the oldest close-in neighborhoods in Austin.  We live in a tiny stone cottage – one of the few stone houses remaining – three miles directly west of Austin’s downtown.  We love how accessible Austin’s downtown has become for us with its restaurants, coffee shops and various goings-ons.  Which leads me to this picture of our more-than-80-year-old house with a disruptive technology in front of it. 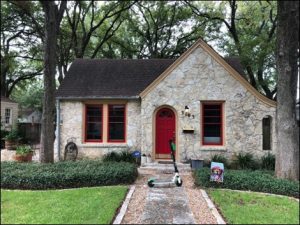 Recently I downloaded the Lime Scooter app to my iPhone. By linking a credit card to my Lime account, I can now rent a scooter by the minute or mile.  These scooters have become ubiquitous across most major urban areas in the country, including all the major cities in Texas: Dallas/Ft. Worth, Houston, San Antonio and our home city of Austin.

A few months ago, the leaders for our four franchise businesses all attended an event downtown.  As we exited the downtown venue, we were greeted by more than a dozen of these scooters sitting in front of the building’s entrance.  I mentioned to our team of mostly 20-something leaders that I had tried out one of these scooters a few times, which they thought was very cool for their decades-older-than-them boss!  One thing led to another, and before I knew quite what had happened, these young managers had sent me on my way home, riding the Lime scooter in the picture above the three miles between downtown and our little house.

Who could have imagined, when our house was built in the 1930s, that one day someone would ride a battery-powered scooter from downtown to our little stone cottage!  Quite probably the original owners could more easily envision a horse-and-buggy ride (indeed, we live one block away from a street named Bridal Path, and some of the larger homes less than a mile from us have “carriage houses” out back). As Bob Dylan wrote (more than 50 years ago!), “the times, they are a-changin.”

How do you and I lead well in times like these, when change seems to be the only constant and disruption is the new norm? Volumes have been written and scores of studies have been completed.  Let me narrow it down to three “best practices” for leaders during times of disruptive change.

First, distinguish between the important and the not-as-important.  My goal that day was to get from downtown to my home.  That afternoon, I intended to have someone drop me off on their way home or take an Uber home (indeed, I uber-ed into the meeting that morning, using an only-slightly-older-than-scooters disruptive technology for my morning commute).  What was important to me was to get home.  How I got home – as long as it was relatively fast and inexpensive – was less important.  Fellow leader, how clear is your thinking on important versus not important?  Far too often we are so focused on “the way it has always been done” that we cannot shed processes and approaches that are no longer effective.

Second, be flexible enough to “fail fast and fail often.” In times of disruption, everyone is trying to stay relevant and ahead of the curve.  To do so, you and I need to give the people in our organizations permission to try new things and rapidly discard them if they aren’t working.  The concept of a “learning organization” really means a “failing-fast-and-learning-from-failure” organization. Fellow leader, how are you encouraging and rewarding team members who think outside the box?

Finally, stay close to your people. Change can be unsettling for many people.  While some people love the roller-coaster-ride of life in the 2020s and others don’t, everyone is always concerned about “what does this mean for me?”  You and I need to demonstrate empathy and understanding for our team members as they react to the changes happening around them. Fellow leader, how often are you taking the time to reassure your people? If the “Ivory Tower” concept of leadership was ever legitimate (and I doubt it was), it most certainly isn’t today.  In the new disruption-is-normal world we live in, our team members need to sense our presence with them.

Postscript: since my three-mile ride a few months ago, I’ve used a rental scooter several more times.  While I’m still more comfortable walking, riding a bike or driving, this “disruptive technology” is now also under my belt.  What new things are you trying out, leader?