It Started Under the Porch

Redford was getting on my nerves. Let me explain.

When we adopted Redford, we lived in a home that had a large porch descending into the backyard. The steps were 12 feet wide and provided not just steps down to the yard, but a place to sit when we had poolside get-togethers in our backyard. My wife and I always liked how wide the steps were – they made a graceful transition from our house to our yard. Unfortunately, one Sunday afternoon shortly after he came to us, Redford had wedged himself underneath these very same steps halfway between each end – six feet away from either of us being able to reach him. Not only was he six feet away from our reach, he was lying in a pool of muddy water. To compound the problem, it was raining “cats and dogs” which seemed fitting, since Redford was our newly adopted Golden Retriever. 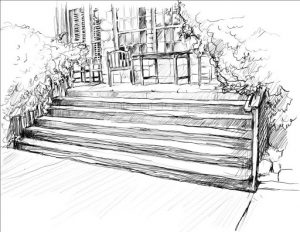 Redford came to us by way of a rescue group in Houston which was part of a nationwide effort to save 66 Goldens who were being abused and neglected at a puppy mill in Arkansas. We were fortunate to contact the Houston group at just the right time when they were trying to find homes for Redford and a number of other Goldens.

Prior to being rescued, Redford most likely spent his days living in a 2-foot by 3-foot crate, only being let out to eat, go to the bathroom and to be used as a breeding sire. The first time I approached him, Redford cowered and put his tail between his legs. He did that around men a lot those first days and weeks. I suspect he was threatened or even hit by a man during his puppy mill days, and for months he carried the fear of men with him. While less scared around women and children, Redford always lacked the joy and affection born into all Golden Retrievers.

When he came to us, Redford had no idea how lucky he was. One week he was barely surviving in a squalid puppy mill, the next week he had won the equivalent of the “doggie lottery” – I wish I could have the life of a dog in our family!

Sammi, our other Golden, was his new best friend. Rascal our cat loved dogs. We had a large yard with lots of room to run. I’m convinced at times our in-ground pool was more for the Goldens than our family members – they swam and played all day long. Regular walks and runs, frequent trips to the local ice cream parlor that gave out free “puppy cups,” a sleeping pad by the master bedroom, good food, lots of affection, and a loving family who would spend whatever we needed to on top-quality veterinarian care – what a life!

Here’s the challenge: Redford didn’t get it. He didn’t know how lucky he was. He had no idea how good we would be to him. And so that rainy Sunday afternoon, he wedged himself underneath the porch, muddy and wet, doing his best to hide from the very family who rescued him.

Well, eventually we got him out from under the steps. Some muddy jeans and wet clothes, a number of very dirty towels, bruised hands and knees, and the job was done. We got him cleaned up, dried off and back in the house.

But as I reflected on Redford’s response to us, it dawned on me that his initial response to us had very little to do with us; rather, it was based on his prior experiences. And that leads to a key leadership lesson: “No matter how much we care for someone, it takes time for them to trust us.”

We loved Redford from the minute we saw him. To paraphrase Renee Zelweiger’s character from the movie Jerry McGuire, “Redford, you had us when we said ‘Hello.’” But Redford didn’t appreciate it. He didn’t realize that we would always provide for him. He couldn’t understand that he would never again lack a roof over his head, good food and a safe environment.

Fellow leader: one of the defining characteristics of an effective leader is consistency. It takes time to build trust. You don’t get to decide the timetable; only the other person does. No matter how well you lead, your team members have to decide to follow you. And some of them will do so slowly. Respect might be given because of position, but real trust is only earned over time. That’s why our character is key: are we stable as leaders? Do we consistently act with fairness and balance? Are we dependable? Do we have a long-term perspective?